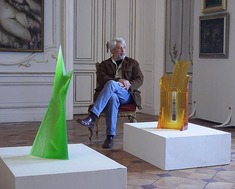 The artist was born in 1953 in the Bulgarian capital and has graduated from the Fine Arts Academy in Prague “UMPRUM” – a major player on the international glass art scene, as in 1954 it was the first school to introduce a graduate program for glass artists. There he studied in the atelier of Stanislav Libensky. Later Valchev specialised in Rosenthal.
In 1993 he was a guest tutor at Pilchuck glass school in Seattle, the United States. From 1994 to 1998 the artist directed the Bulgarian cultural center in Prague and is currently teaching glass art in the department of plastic arts in the New Bulgarian University in Sofia.
The artist lives and works between Prague and Sofia.